The one-cent coin, commonly known as the penny, was the first currency of any type authorized by the United States, and for over two centuries, the penny’s design has symbolized the spirit of the nation, from Liberty to Lincoln. The design for the first one-cent coin was suggested by Benjamin Franklin.

The original one-cent coin was over five times heavier and almost 50% lager than its contemporary counterpart. The word “penny” is derived from the original British coin of the same name.

The first one-cent coin was struck in 1787 by a private mint. This coin, known as the Fugio cent, was 100% copper and this composition would continue until the mid-1800’s. Paul Revere, a noted blacksmith, supplied some of the copper for one-cent coins minted during the early 1790’s.

No one-cent coins were minted in 1815 due to a copper shortage caused by the War of 1812 with Great Britain. 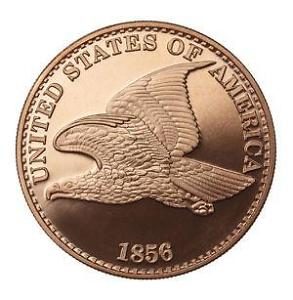 The Flying Eagle cent was first produced in 1856. This coin was notable for its change in composition – – 88% copper and 12% nickel.  The Indian cent was first introduced in 1859 and depicted an Indian princess on the obverse. A popular story about its design claims a visiting Indian chief lent the designer’s daughter his headdress so she could pose as the Indian princess. Most Indian cents minted during the Civil War went primarily to pay Union soldiers. After the Civil War, in 1864, the composition of the one-cent coin was changed to 95% copper and 5% zinc.

The one-cent coin was made legal tender by the Coinage Act of 1864.

In 1909, Abraham Lincoln was the first historical figure to grace a U.S. coin when he was portrayed on the one-cent coin to commemorate his 100th birthday. The Lincoln penny was also the first U.S. cent to include the words “In God We Trust.”

During part of World War II, zinc-coated steel cents were struck due to a copper shortage.

In 2009, to honor the 200th anniversary of Lincoln’s birth, four penny designs depicting different aspects of the 16th President’s life were circulated.

In the current 2010 design, “Preservation of the Union”, the reverse design is emblematic of President Abraham Lincoln’s preservation of the United States as a single and united country, with a union shield with a scroll draped across and the inscription ONE CENT. The obverse (heads) continues to bear the familiar Victor David Brenner likeness of President Lincoln that has appeared on the coin since 1909.